The Gatehouse weatherstation is located in the hamlet of Gatehouse in Tarset, Northumberland, England at:

The Gatehouse weatherstation provides live weather data for Gatehouse in Tarset, near the popular tourist areas of Kielder Forest, Kielder Water and English Heritage's Black Middens Bastle House. Gatehouse itself is within both the Northumberland National Park, and the Northumberland Dark Sky Park, Europe’s largest area of protected night sky.

The weatherstation provides a very short-term forecast based on the current conditions and pressure trend. Alternative medium and longer-range forecasts are available for:

Current conditions in Tarset and further afield can also been displayed using the live visualisation tool Ventusky published by InMeteo.

The main system components are:

Davis Vantage Pro II was purchased from Cambridgeshire-based Prodata Weather Systems. Originally when the weather station was set up in 2008, commercial software running on a Windows XP PC was used to communicate with the local weather station data logger, which in turn polled information from the external weather station wirelessly. The internal PC aggregated the information and emailed weather data to the remotely hosted web server every 10 minutes. But the PC was over-powered for these basic requirements and, having to run 24 hours/day, lead to un-necessary energy usage. In May 2015 the personal computer (PC) at Gatehouse Cottage and the web server that publishes the information have been completely replaced to bring the systems up-to-date.

The local PC had become out-of-date and Windows XP was no longer supported, and thus in early 2015 alternative replacements were considered. In February 2015 a new version of the credit-card sized Pi computer was released by the Raspberry Pi Foundation, a registered educational charity. The device is small and uses very little power. And furthermore it was discovered that there was now open source software available that could communicate with the weather station's data logger. The £25 Raspberry Pi 2 Model B has a 900MHz quad-core CPU, 1GB RAM, four USB ports, a HDMI port and an ethernet port. An SD card slot is used for the operating system and other installed software. The SD Card and a power supply are additional costs; a spare mouse, keyboard and the TV were used during the initial configuration. Typically, the Model B uses between 700-1000mA, so the backup power supply will last longer than with the previous PC during a power cut. 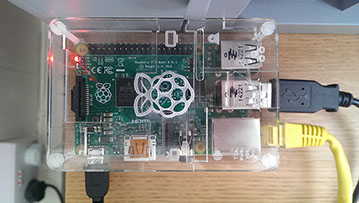 Raspbian, a free operating system based on Debian optimised for the Raspberry Pi hardware, was installed. Then WeeWX software was installed and configured – this is a free open source weather station program written in the Python programming language, making it relatively easy to use and extend. Some minor changes were necessary to accommodate the way data is formatted, but the weather has been running solely using the Model B Pi since mid-May. Separately, the Gatehouse Cottage website, which undertakes the weather data storage and re-publication, was moved from a now unsupported server operating system, Windows Server 2003, to the latest Microsoft version, Windows Server 2012 R2.

The automatic weather station can under-report rainfall. This is because the rain gauge will at times be within the shade of a large sycamore tree at the roadside. Although the location is not optimal for rain, the gauge and other monitoring equipment need to be within WiFi range of the receiving console, and still be accessible for periodic cleaning and other maintenance. Therefore, from 2017 a manual rain gauge has been used to complement data from the automatic weather station. The device is a 5-inch standard cylindrical rain gauge comprising a funnel with a sharp rim, with a storage bottle inside a storage vessel. Precipitation is determined by measuring the accumulated water in the storage bottle using a specially calibrated translucent plastic measuring cup. Snowfall can also be measured by melting the snow with a known volume of hot water. The manual gauge has been positioned nearby the automatic station, but away from the tree's rain shadow. Measurements are now being taken weekly, compared with the readings from the automated (tipping bucket) rain gauge, and the stored data records are adjusted if necessary.

The Davis Vantage Pro II weather station began operation in August 2008. Excluding some network outages, it has been collecting weather data continuously. When it was first commissioned there were very few choices available for exporting and republishing the data. All the free and commercial weather display software were rather clunky and poorly designed. Initially weather data was emailed to a web server hosting the Gatehouse Cottage website, where the data were stored in a MySQL database and an XML summary file published. This XML was used by two specially written Adobe Flash applications — the primary weather information display on the Gatehouse Cottage website and a summary weather panel on the Tarset website. 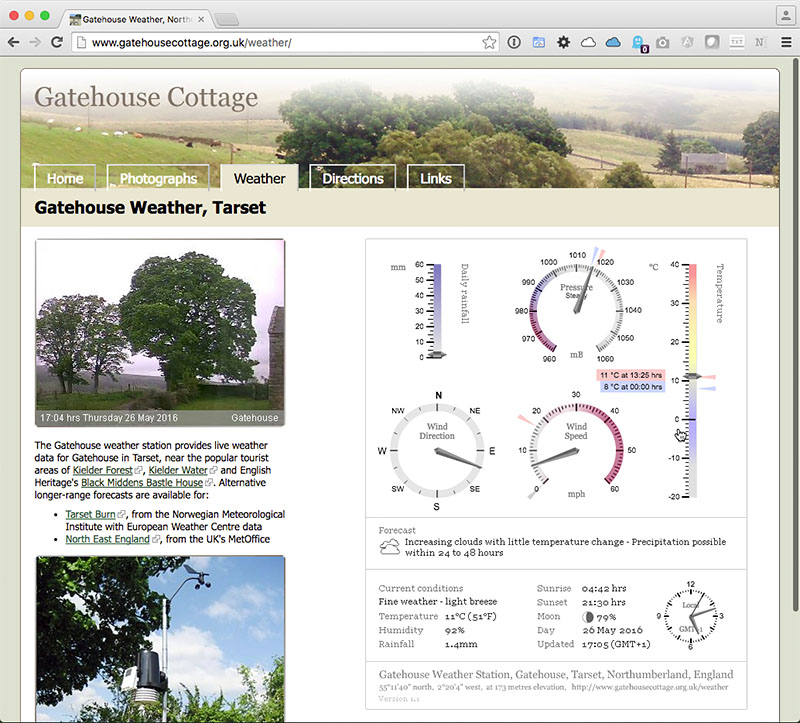 When the Tarset website's design was refreshed in March 2015, the home page weather panel was changed to make it compatible with a wider range of user devices, including mobile phones and tablets. 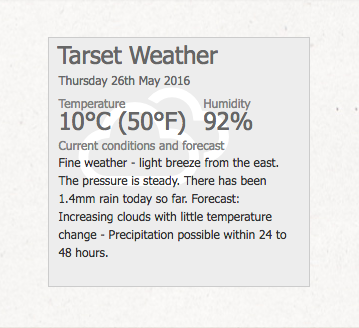 Weather charts and summary data have been provided to the quarterly local newsletter Tarset News since 2008. Until recently, this comprised of a combination of text information and simple charts for daily temperature high/low and rainfall.

Since 2016, these have been replaced by quarterly infographics, containing greater information and analysis, and which are reproduced here on this website.

The weatherstation tweets from @TarsetWeather regularly. Each day this comprises a summary of the previous day's conditions at 05:00hrs, current conditions at 06:00, 12:00, 10:00 and 23:00hrs, with the forecast at 07:00hrs and hourly if it changes.